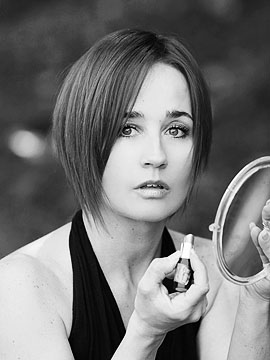 She began dancing in her native Buenos Aires at the tender age of three. She went from Argentine folk dance, which she practiced for over twenty years, perfecting her style with Mabel Pimentel and Oscar Murillo, to classical and contemporary dance, and from there to the tango, which she studied with masters of the art in Argentina: Esther and Mingo Pugliese, Gloria and Eduardo, Carlos Rivarola, Raul Bravo, Gustavo Naveira and Giselle Anne.

She was on the panel of judges at the 2008 “Danza in fiera” musical event in Florence. She has performed in television programs for Rai 1, Rai 2 and Canale 5. She performs in milongas and tango festivals in Rome, Italy and Europe (London, Weimar, etc. with internationally renowned dancers and sings in the “Marcela Szurkalo quartet”.

She performed at Palazzo Torlonia in Rome for the “Via Condotti 2010 prize” awarded to Pippo Baudo, Giuseppe Tornatore, Federica Pellegrini, Carlo Giuffrè and Elio Toaff.

In February 2011 she took part in an international competition in South Korea with the Tango Spleen Orchestra.

In 2012 she was invited to take part in a program choreographed by Luigi Martelletta entitled “Momenti di Tango”, with the Raffaelle Paganini Company.

She was the soloist singer at a presentation of Roberto Litta’s book “The Man Who Lived Twice” at “La casa del jazz” in Rome.

In 2012 and 2013 she was invited to tour Italy as the tangoist in the Biagio Antonacci show.